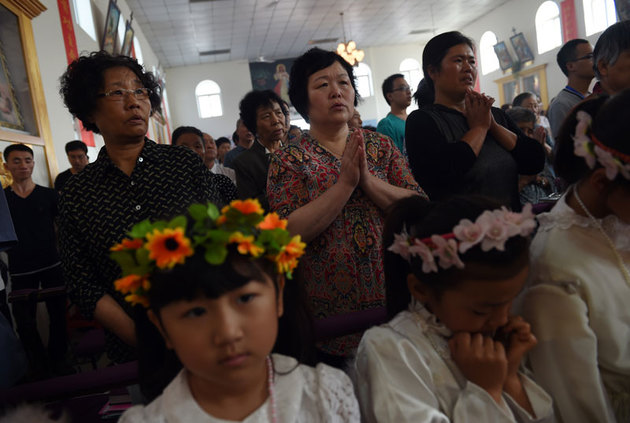 The ruling Chinese Communist Party has warned that any of its members who harbor religious beliefs or take part in religious activities could become the targets of its powerful disciplinary arm.

In an opinion article published at the weekend, the newsletter of the party's Central Commission for Discipline Inspection (CCDI), said the problem of religious believers within party ranks is "attracting serious concern."

"The fact that a small number of party members have forsaken the party's world view of dialectical materialism and have turned to religion is now attracting serious concern, to the extent that it now falls within the purview of disciplinary work," the article, published on

"There can be no doubt about the fact that the founding ideological principle that Communist Party members cannot be religious believers has been upheld by our party from the outset," the paper said.

China's Communist Party members number 86.7 million, some six percent of the country's population, second only to the 88 million claimed by India's Bharatiya Janata Party (BJP), according to figures released in 2014.

According to the article, party members don't enjoy any right to religious freedom, a right which many religious believers complain is routinely violated by officials across the country.

"Chinese citizens have the freedom of religious belief, but Communist Party members aren't the same as regular citizens; they are fighters in the vanguard for a communist consciousness," the paper said.

"They are firm Marxists, and also atheists."

"That's why it has been clearly stated in party rules that Communist Party members may not hold religious beliefs, nor must they take part in religious activities," the article warned.

Beijing Protestant house church member Xu Yonghai said the article shows growing concern among party leaders that many in the rank and file of the party have quietly ceased to believe in communism, prompted by the political violence of the Mao era and the People's Liberation Army (PLA) crackdown that ended the 1989 pro-democracy movement.

"Many of them went on to find an authentic faith, and became Protestant Christians," he said. "Back in the 1990s, a lot of people wanted to leave the party, but later on they found that they couldn't."

"Either they weren't allowed to, or it was made very difficult for them, so that's why we now have this problem," Xu said, adding: "Genuine believers in communism are few and far between, nowadays."

According to Beijing-based Protestant pastor Liu Fenggang, this loss of faith reaches right to the highest echelons of party leadership.

"We frequently come across this issue in our missionary work," Liu said. "For many years now, a lot of Chinese officials and Communist Party members and their families have been turning to Jesus."

He said the reason was a large number of "political mistakes" made by the party since it came to power more than 60 years ago.

"They have made so many mistakes, both on the left and the right," Liu said, adding that many party members who converted had persecuted Christians in the past.

"Our churches are still the targets of atheist persecution, for example, the forced demolition of crosses," Liu said, adding that the party seems determined to step up controls on religious practice in China.

"It is likely that the situation will get worse and worse," he said.

In the southern city of Guangzhou, Protestant pastor Ma Zhao said his entire congregation had been held in a local police station for around four hours on

"They were very rude and said we were breaking the law," Ma said. "They wouldn't listen to anything we said, but they just kidnapped all of us, two to each person."

"They took us all out, and when we tried to film or take photos, they confiscated our cameras," he said, adding that his group has come under increasing pressure to join the government-approved Three Self Association of Chinese Protestant churches.

China has an army of officials whose job is to watch over faith-based activities, which have spread rapidly in recent decades amid sweeping economic and social change, sparking official fears that foreign ideas are increasingly gaining traction among the country's 1.3 billion population.

Party officials are put in charge of Catholics, Buddhists, Taoists, Muslims, and Protestants. Judaism isn't recognized, and worship in non-recognized temples, churches, or mosques is against the law.

The CCDI article comes after President Xi Jinping warned a high-level ideological conference last week that the development of religion in China should be "independent of foreign influence."

"Christian congregations have expanded since churches began reopening after the Cultural Revolution," the party-backed Global Times newspaper said in a recent commentary.

"Religion can be easily used by hostile external forces, especially among separatists in Tibet and Xinjiang autonomous regions, to infiltrate Chinese society, and that may impact the stability of the country," the paper paraphrased Xi as saying.

It accused exiled Tibetan spiritual leader the Dalai Lama of "plotting" to seek independence for the Himalayan region, by urging "foreign forces" to put pressure on the Chinese governance.

"Those who hold prejudice against China's political system often have twisted feelings toward the development of religion in the country,"

"But religions are not a tool for them to challenge authority," it said.

In recent months, authorities in the eastern city of Wenzhou have carried out an ongoing demolition program targeting large and highly visible churches and crosses in the city, which is home to an estimated one million Chinese Christians.

Party leaders in the city, dubbed "China's Jerusalem," last week threatened to expel members who put religious beliefs ahead of ideology in a "rectification" campaign.

"Those who lack ideals and beliefs, lose party concepts, do not have the qualifications for party members (and) will resolutely be expelled," the document, posted online