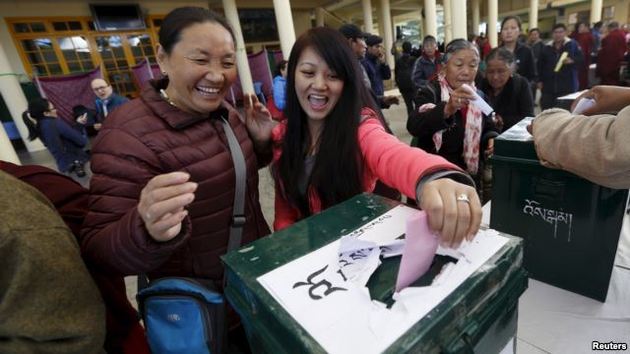 NEW DELHI - Tens of thousands of Tibetans living in exile in India and other countries voted Sunday to elect a new political leader to spearhead the struggle for autonomy for Chinese-ruled Tibet. The second election since the spiritual head of Tibetans, the Dalai Lama, handed over political authority in 2011 of the government Beijing does not recognize was held amid concerns about the health of the charismatic leader.

While about 90,000 Tibetans across the world are eligible to vote, the main spotlight is on Dharamsala in northern India, where the Tibet government in exile has its headquarters. In a festive atmosphere, Buddhist monks and nuns clad in maroon robes, and other Tibetans lined up outside polling booths in the picturesque Himalayan town to choose between two main contenders for the prime minister's job, the incumbent, Lobsang Sangay, and Penpa Tsering.

Both candidates have said they will continue to support the "Middle Way" approach advocated by the Dalai Lama that involves dialogue with Beijing to achieve autonomy for Tibet. Soon after casting his vote, Sangay said the exiled Tibetan leaders are ready for talks with China, and will take it further as soon as Beijing gives a positive sign. Talks between the Dalai Lama's envoys and the Chinese government have been stalled since 2010, but Sangay's efforts to pursue a dialogue with Beijing during his term have borne no fruit.

Beijing does not recognize the Tibetan government in exile. At a regular news briefing Thursday, Chinese Foreign Ministry spokesman Lu Kang said, "We hope that all countries in this world, especially those that want to maintain friendly relations with China, will not provide facilities or venues for any anti-China, separatist activities by the so-called Tibet independence forces." Sonam Dagpo, Secretary at the exiled government's Department of International Relations in Dharamsala says the Chinese government is trying to misinterpret the "Middle Way" approach when it says that Tibetans in exile are seeking separation from China. "In reality, since 1979, we have been pursuing a non-violent and Middle Way approach, not seeking independence. And that has been continued till today and that will continue in future by whoever wins," he says.

Although the Dalai Lama has relinquished political authority, he remains the most powerful rallying point for Tibetans and the best-known face of its struggle worldwide. But there have been concerns over the health of the 80-year-old leader, who cancelled a trip to the United States last year and was also treated at a U.S. hospital earlier this year.

A foreign policy professor at New Delhi's Jawaharlal Nehru University, Chintamani Mahapatra, says there is stepped-up interest in the election. "The Dalai Lama is getting older and everybody is preparing for a transition. And so the next elected candidate would have to probably see the transition happening," he says.

The voters include thousands of young Tibetans who have never been inside their homeland. Youth activist, Lobsang Tseten is excited about the election, especially because he sees that many younger people have entered the fray for the 45 seats of parliament also being contested. "Our goal is through this election, is asserting ourselves that we belong to this Tibetan community, we are a whole different community from the Chinese government and I think the goal is to show the world that ours is a democratic state and we give a platform to people to make their voice heard," says Tseten. He is confident the participation of the youth will give fresh energy and momentum to the Tibetan struggle.

The Dalai Lama and his followers have been living in exile in Dharmsala since they fled Tibet after a failed 1959 uprising against Chinese rule.