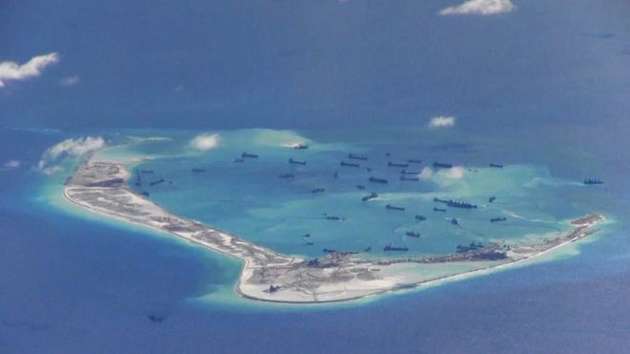 BEIJING, China - A leading Chinese newspaper has said that China should prepare itself for military confrontation in South China Sea.

This comes a week before an international court is to give a decision over the dispute between Philippines and China.

According to reports, tensions are high ahead of the July 12 ruling by the arbitration court that is hearing the dispute over South China Sea between China and Philippines in The Hague.

Reports indicate that the state-run Global Times has said that the situation has already been complicated by U.S. intervention and now it has become worse with the tribunal threatening Chinas sovereignty.

It said, Washington has deployed two carrier battle groups around the South China Sea, and it wants to send a signal by flexing its muscles: As the biggest powerhouse in the region, it awaits China's obedience. Even though China cannot keep up with the U.S. militarily in the short-term, it should be able to let the U.S. pay a cost it cannot stand if it intervenes in the South China Sea dispute by force. China hopes disputes can be resolved by talks, but it must be prepared for any military confrontation. This is common sense in international relations."

The newspaper is reportedly published by the ruling Communist Party's official People's Daily and it is known for its extreme nationalist views.

According to reports, two guided missile destroyers, the Shenyang and Ningbo, and one missile frigate, the Chaozhou were among the vessels deployed to the region.

The exercise will be held inside a 100,000 square kilometre zone around the disputed Paracel Islands.

The July 12 ruling will decide if Philippines has any right to exploit the waters in the South China Sea which is claimed by both countries.

China has however chosen to not acknowledge the courts authority.

Manila has reportedly sought to dial down tensions with Beijing but will not ignore the ruling, despite the pressure.

Philippines Foreign Minister Perfecto Yasay said, The reality is that nobody wants a conflict, nobody wants to resolve our conflict in a violent manner, nobody wants war. It is my understanding that the President would like to maintain stronger, better relationships with everybody, including China, including the United States, including Japan and all.

Six Pacific nations including Brunei, Malaysia, Philippines, Taiwan and Vietnam have territorial claims in theSouthChinaSea that is believed to have huge deposits of oil and gas and also witness over $5 trillion in global ship-borne trade passing by each year.