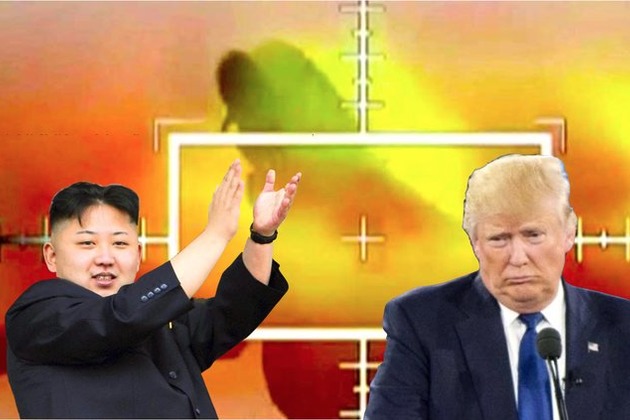 The video shows fictional footage of North Korean troops destroying the USS Carl Vinson and later blowing up a B-51 bomber.

It also shows the USS Carl Vinson nuclear-powered aircraft carrier up in flames.

The 3-minute long video clip comes as an apparent response to the joint U.S.-South Korean military exercises in the region that North Korea has criticised in recent weeks.

The Yonhap News Agency quoted a female narrator as saying in the background of the video, "a knife will be stabbed into the throat of the carrier, while the bomber will fall from the sky after getting hit by a jail of fire."

According to reports, the video uses images from the annual "Foal Eagle" military drills being conducted by the U.S. and South Korea.

The video also shows snaps from the country's recent ballistic missile launches, alongside the haunting message

Recently, the U.S. Secretary of State, Rex Tillerson, who was on his maiden Asia visit to calm and reassure allies in the region against the threats arising from Pyongyang, had said that the U.S. might consider military action against the reclusive nation.

Now, through this video, North Korea declared that it is not scared of America's threat of possible pre-emptive military action to stop its nuclear build-up.

Further, a spokesman for North Korea's Foreign Ministry slammed Tillerson's talk of tougher sanctions too - claiming the North would not be deterred in its nuclear program.

The official Korean Central News Agency quoted the spokesman as saying, "The nuclear force of (North Korea) is the treasured sword of justice and the most reliable war deterrence to defend the socialist motherland and the life of its people."

Earlier this month, as the U.S. strike group arrived in South Korea for joint military drills - North Korea had issued a grave warning.

Pyongyang warned in a statement that if the U.S. aircraft carrier strike group and South Korean forces infringe on its sovereignty or dignity - North Korea would launch "merciless" attacks.

The U.S. aircraft carrier strike group, led by the USS Carl Vinson joined the South Korean forces for exercises and North Korea believes that the arrival of the U.S. strike group was part of a "reckless scheme" to attack it.

In a statement on the state-run news agency KCNA, it had said, "If they infringe on the DPRK's (Democratic People's Republic of Korea) sovereignty and dignity even a bit, its army will launch merciless ultra-precision strikes from ground, air, sea and underwater. On March 11 alone, many enemy carrier-based aircraft flew along a course near territorial air and waters of the DPRK to stage drills of dropping bombs and making surprise attacks on the ground targets of its army."

North Korea said that the U.S.-South Korea military drills was a sign that the countries were preparing for war.

Authorities leading the large-scale joint military drills by U.S. and South Korea, that began on March 1, argued that the drills were defensive in nature.

Further, the Kim Jong Un-led regime, on Saturday, conducted a ground test of a new type of high-thrust rocket engine that the country's leader said was a "revolutionary breakthrough for the country's space program."

A KCNA report noted that Kim Jong Un attended Saturday's test at the Sohae launch site, and said that the test was intended to confirm the "new type" of engine's thrust power and gauge the reliability of its control system and structural safety.

Jong Un, deflecting all the blows coming his way, called the test "a great event of historic significance" for the country's indigenous rocket industry.

He further declared that the "whole world will soon witness what eventful significance the great victory won today carries" - claiming that the test marks what will be known as the "March 18 revolution" in the development of the country's rocket industry.

The report further indicated that the engine would be used for North Korea's space and satellite-launching programme.

Officials in Pyongyang have said that they intend to launch more Earth observation satellites as part of their five-year plan.

However, even as its program enhances, North continues to face the strict ban placed against it by the United Nations, that prohibits the country from conducting long-range missile tests.

Even though Pyongyang continues to defy the ban and sanctions, by pacing ahead in its nuclear program, the country has argued that its satellite program is for peaceful use.

Commenting on the test, Lee Jin-woo, deputy spokesman for the South Korean defence ministry, said, "Through this test, it is found that engine function has made meaningful progress but further analysis is needed for exact thrust and possible uses."