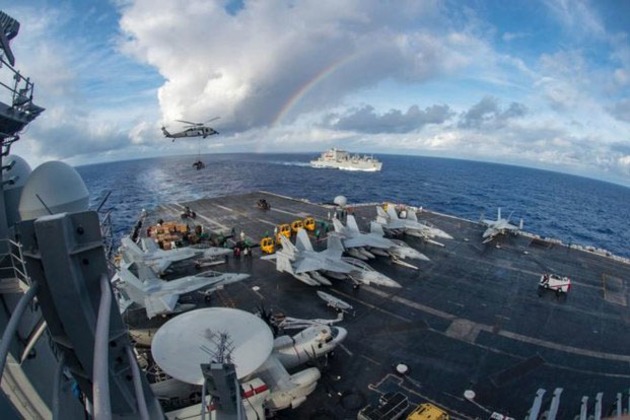 Trump has repeatedly called on China to do more to rein in its traditional ally amid growing speculation of a sixth nuclear test in the coming days or weeks.

"[China] hopes that the relevant parties can maintain restraint and avoid actions that would increase tensions in the Korean peninsula," Xi said, according to the foreign ministry.

Pyongyang insists it needs nuclear weapons to protect itself from what it says is the ever-present threat of invasion by hostile U.S. forces.

"Even though they are also a dictatorship, the same as [China], there is still a big difference between their ideas about how a country should be run, their policies," Hebei-based veteran journalist Zhu Xinxin told RFA.

"As the country that is more open to the outside world, and which respects some international law and conventions ... China knows very well that trying to appease North Korea will do the rest of the world no good, nor indeed China itself," Zhu said.

"They are currently juggling various interests, but it is inevitable that Beijing will have to sacrifice those of North Korea in order to protect itself," he said.

Wu Fei, senior fellow at the Chinese public diplomacy and international relations think tank Chahar Institute, agreed, saying that some level of cooperation with the United States on North Korea is to be expected.

"I think that there is a certain amount of consensus between China and the U.S.," Wu said. "One is that the peninsula should be denuclearized, and the other is that North Korea can't be allowed to conduct nuclear tests indefinitely, destabilizing the whole of Northeast Asia."

"[The two sides are likely to take] a responsible attitude towards advancing international norms,"' he said. "If that happens, North Korea won't have a pretext upon which to launch a counterattack."

However, Chinese police in the northeastern city of Shenyang appear to be still cooperating with North Korea by detaining and forcibly repatriating North Koreans seeking political asylum after fleeing the country.

New York-based Human Rights Watch (HRW) called on Beijing to disclose the whereabouts of eight North Korean refugees currently detained in China, and not to repatriate them.

HRW China researcher Maya Wang told RFA that the eight refugees will be in danger if handed over to North Korean authorities.

"This is a group of eight people who face being forcibly repatriated, to face a likely risk of torture, detention or surveillance and other forms of cruel and degrading treatment," Wang told RFA.

"We are calling on the Chinese government to make public details of their situation, and not to send them back to North Korea," she said.

"There is no way to sugar coat this: if this group is forced back to North Korea, their lives and safety will be at risk," he said in a statement on the group's website.

"The world is watching to see whether Beijing observes its duty to protect these eight refugees or becomes complicit with North Korea's abuses," he said.

The North Koreans were detained last month after being discovered in a random roadside checkpoint in Shenyang, Liaoning province, the group said.

Among the group are two women who said they had previously been sold to Chinese men and faced beatings at their hands, while two others were suffering from untreated injuries, HRW said, adding that it has documented at least 41 detentions of North Koreans in China in the past nine months.

Earlier this month, China suspended flights to Pyongyang by its flag carrier Air China, and halted all coal imports from the isolated Stalinist state last February.

'Conflict at any moment'

Beijing has warned that a conflict over North Korea could break out "at any moment" following a failed missile test a day after the 105th anniversary of the birth of North Korea's founder Kim Il Sung.

There are now fears a nuclear test could be scheduled for Tuesday, the anniversary of the founding of the North Korean army.

North Korean state media called the imminent arrival of the Vinson a form of "military blackmail," signaling an imminent invasion of North Korea by the United States.

"The world will witness how Washington's rash nuclear aircraft carriers are turned into a huge pile of steel and buried at sea and how a country called America is wiped out from the Earth," the paper warned.

Reported by Yang Fan for RFA's Mandarin Service, and by Hai Nan for the Cantonese Service. Translated and edited by Luisetta Mudie.