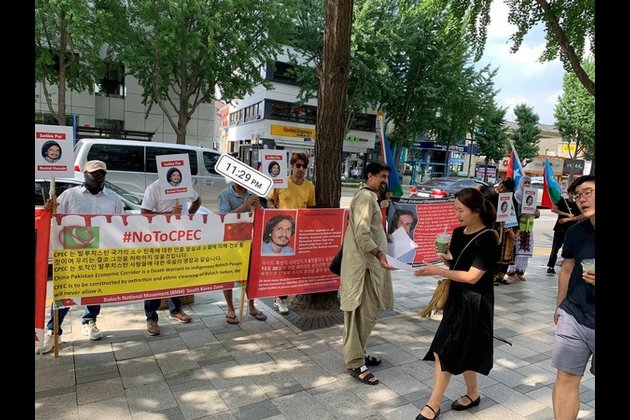 Seoul [South Korea], Aug 3 (ANI): Protesters from the Baloch National Movement took to the streets in Seoul to demonstrate against Pakistani "barbarism" and the "exploitative" China-Pakistan Economic Corridor (CPEC) projects in Balochistan.

The protests were held in the South Korean capital on Friday. The agitators marched to the Pakistani and Chinese embassies, and the Amnesty office here to submit memorandums against the disappearance of thousands of Baloch people by Pakistan, according to BNM.

"BNM activists march in streets of Seoul to reach Pakistani and Chinese embassies and @amnesty S. Korean office to submit memorandums regarding the disappearance of 1000s of Baloch by Pakistan. After CPEC agreement China has joined hands to Pakistan in BalochGenocide," BNM tweeted.

The protesters chanted slogans in Korean language, highlighting the atrocities they are currently facing at the hands of Pakistan in Balochistan.

"BNM protestors chanting slogans in the Korean language against China and Pakistan and in favour of an independent Balochistan in South Korean capital Seoul, today...BNM activists marching in streets of Seoul and chanting slogans against Pakistani atrocities in Balochistan," they stated.

"President of BNM South Korea, Naseer Baloch - @nbalochistani1 and General Secretary Yaseen Baloch submit a memorandum to Amnestyinternational officials regarding the disappearance of RashidHussain and 1000s of other Baloch by Pakistani forces in Balochistan. BNM protest in front of Pakistani and Chinese embassies in South Korean capital Seoul against Pakistani barbarism and exploitive CPEC projects in Balochistan," they further tweeted. (ANI)