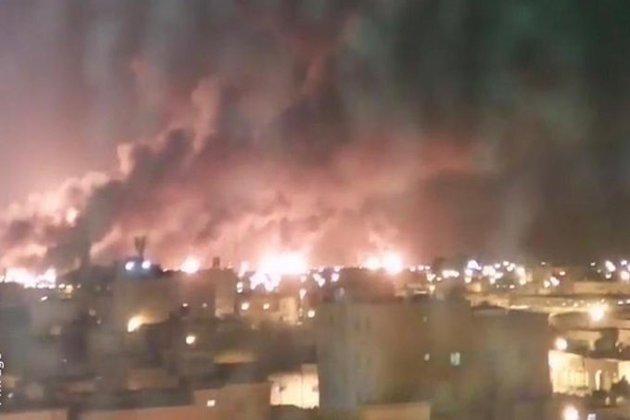 Saudi Arabia has not determined who was behind the attacks but says they did not originate in Yemen, despite claims of responsibility by the al-Houthi rebels.

There are suggestions cruise missiles and drones were used in the attacks, and they originated from either Iraq or Iran. Both those countries have denied any involvement.

The UN Secretary-General appealed on Sunday for "maximum restraint."

The Saudi oilfields have come under attack over the course of the past year from the al-Houthi rebels who control much of war-ravaged Yemen.

Saudi Aramco's two plants which were damaged in the attacks have had to reduce production by around 5.7 million barrels a day, more than 5% of the world's supply of crude oil. Oil prices rose by as much as 12% on Monday.

Within a day of the attacks early Saturday, U.S. Secretary of State was alleging Iran was the aggressor. "Tehran is behind nearly 100 attacks on Saudi Arabia while Rouhani and Zarif pretend to engage in diplomacy. Amid all the calls for de-escalation, Iran has now launched an unprecedented attack on the world's energy supply. There is no evidence the attacks came from Yemen," Pompeo posted on Twitter on Sunday.

Before any conclusion as to who might be to blame for the attacks by Saudi officials, Mr Pompeo was calling on other nations to condemn 'the Iran attacks.'

"We call on all nations to publicly and unequivocally condemn Iran's attacks. The United States will work with our partners and allies to ensure that energy markets remain well supplied and Iran is held accountable for its aggression," he tweeted on Sunday.

U.S. President Donald Trump took to Twitter Sunday to congratulate himself as having put the United States in a position which he says has removed the U.S. from its dependence on Middle Eastern oil, but says he will help his country's allies.

"Because we have done so well with Energy over the last few years (thank you, Mr. President!), we are a net Energy Exporter, & now the Number One Energy Producer in the World. We don't need Middle Eastern Oil & Gas, & in fact have very few tankers there, but will help our Allies!" Mr Trump tweeted on Sunday.

In a follow-up tweet two hours later he left open the possibility Iran was not behind Saturday's attacks, saying simply, 'we'll see.'

"Remember when Iran shot down a drone, saying knowingly that it was in their "airspace" when, in fact, it was nowhere close. They stuck strongly to that story knowing that it was a very big lie. Now they say that they had nothing to do with the attack on Saudi Arabia. We'll see?" he tweeted.

By Monday thought, the Saudi-led coalition fighting al-Houthi rebels in Yemen claimed the weaponry used in Saturday's attacks were Iranian-made. They also disputed the attacks originated from Yemen.

"The investigation is continuing and all indications are that weapons used in both attacks came from Iran," coalition spokesman Turki Al-Maliki told a press conference in Riyadh. "This strike didn't come from Yemen territory as the Houthi militia are pretending," he added.

A spokesperson for Antnio Guterres, the UN Secretary-General said Sunday, "the Secretary-General condemns Saturday's attacks on Aramco oil facilities in the Eastern Province in the Kingdom of Saudi Arabia claimed by the Houthis," and "calls upon all parties to exercise maximum restraint, prevent any escalation amid heightened tensions, and to comply at all times with International Humanitarian Law."

On Saturday, UN Special Envoy for Yemen, Martin Griffiths, described the military escalation as "extremely worrying", and urged "all parties to prevent such further incidents, which pose a serious threat to regional security, complicating the already fragile situation, and jeopardizing the UN-led political process."

Tensions have been high since June between Iran, the U.S., Saudi Arabia and nations involved in the global oil trade, over the key oil shipping lanes around the Strait of Hormuz and the Gulf of Oman, involving tankers damaged at sea, leading to the downing of both Iranian and U.S. drones, while other tankers were seized.

When this writer recently looked into the mirror and took a good look at how long his hair had grown ...

How London's 100 or so billionaires are faring

Over cups of tea in his ramshackle London home I chatted with a novelist. It felt a valuable opportunity, given ...

CANBERRA, Australia - Australian Federal Police said Wednesday they were dropping an investigation of a prominent journalist who obtained classified ...

CANBERRA, Australia - Australian Federal Police said Wednesday they were dropping an investigation of a prominent journalist who obtained classified ...

Chinese city of Nyingchi to see wave of new development

LHASA, May 27 (Xinhua) - Construction has begun on 40 key projects in the city of Nyingchi, southwest of China's ...