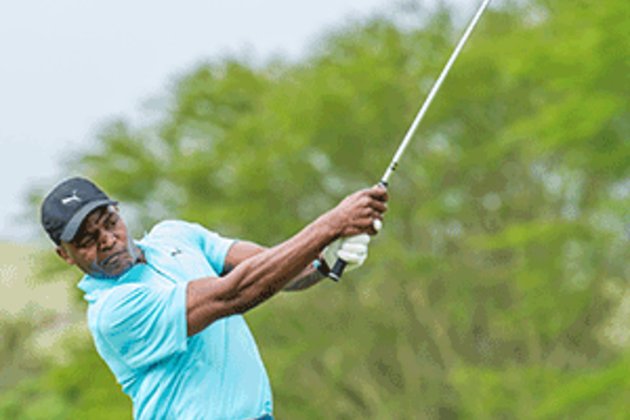 Selborne - Former Springbok Chiliboy Ralepelle is showing off his skill on a different field by taking part in the Vodacom Origins of Golf pro-am on Tuesday and Wednesday at the Selborne Golf Estate, Hotel and Spa.

Teaming up with professionals Trevor Fisher Jnr and Toto Thimba as well as television presenter OG Molefe, the fourball is certainly one of the most entertaining taking part in this week's event.

Ralepelle, who was capped 25 times for the Springboks, lays off a 14-handicap and is particularly enjoying the relaxed atmosphere of the pro-am.

"It's such a wonderful event and I'm very thankful to be part of the Vodacom Origins of Golf Selborne pro-am," said Ralepelle.

"I and am looking forward to playing with my fourball and with such great professional golfers in my fourball, I'm happy to have someone like Toto Thimba carrying me through the 18 holes."

Turning his attention to national team currently at the Rugby World Cup in Japan, the former Bok reflected on this weekend's upcoming match.

The Springboks kick-off against Japan at 12:15 SA time on Sunday.

"It's going to be a big game for us this weekend, but I don't think we should make it bigger than it already is for the guys."

After their loss to the Brave Blossoms in 2015 the pressure is on the Springboks to avoid a similar situation against a Japanese team that is riding a wave of optimism after their emotional win against Scotland to secure quarter-final qualification, in the wake of the devastating Typhoon Hagibis.

Ralepelle could however not contain his own enthusiasm for the upcoming clash.

"It is getting very exciting as it's the knock-out stages and now it's all to play for. But that's Sunday. Now, it's about having a great time with my fourball and the rest of the field and enjoying the game of golf here at the beautiful Selborne."

The pro-am section of the Vodacom Origins of Golf at Selborne is followed by the main 54-hole professional tournament that tees off this Thursday.