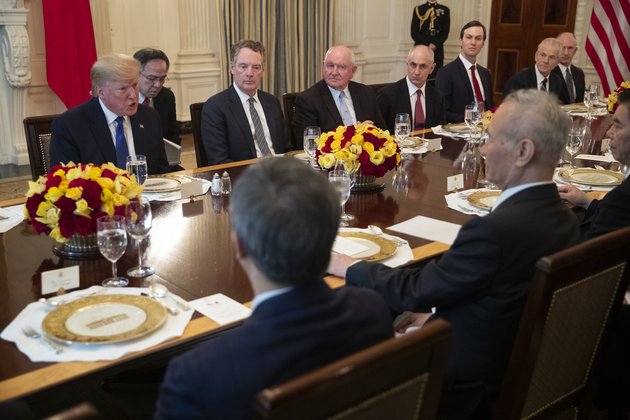 STATE DEPARTMENT - The United States and China agreed to a 'Phase 1' trade deal on Wednesday that includes the protection of intellectual property rights and agricultural policy.

Both countries say they plan to continue working on issues. "

The parties intend to continue implementation and improvement of existing mechanisms for bilateral communication on agricultural policy," according to the text of the agreement.

Substantial U.S.-China talks outside of trade have been in limbo for months.

While there was no particular mention of resuming regular talks under the so-called Comprehensive Economic Dialogue (CED), the world's two leading economies agreed on the "regular interaction through meetings and other communications" on the protection of intellectual property rights and other pragmatic cooperation.

CED is one of four mechanisms initiated under U.S. President Donald Trump's administration to deal with China-related issues. The others are Diplomatic and Security Dialogue (DSD), the Law Enforcement and Cybersecurity Dialogue, and the Social and Cultural Issues Dialogue.

The annual Diplomatic and Security Dialogue (DSD) was last held in Washington more than a year ago in November.

Citing Washington's call for a "results-oriented" relationship with Beijing, U.S. officials are reportedly not anxious to resume the DSD, which is perceived as highly symbolic.

On Jan. 3, U.S. Secretary of State Mike Pompeo spoke to Chinese Politburo member Yang Jiechi by phone after the U.S.- targeted killing of top Iranian commander Qassem Soleimani. Yang raised the resumption of DSD with Pompeo, according to a diplomatic source.

"We are not going to comment on the details of our diplomatic conversations or engagements," a State Department spokesperson told VOA.

One of the top issues on the U.S. agenda is persuading China to halt the purchase of oil from Iran, which Washington says has fueled Tehran's nuclear and missile ambitions. Trump has also called on China and other signatories of the so-called JCPOA Iran nuclear deal to "walk away from the 2015 deal."

Sorry, but your player cannot support embedded video of this type, you can download this video to view it offline.

While senior administration officials say they have repeatedly emphasized to Beijing "the threat posed to regional stability by Iran's nuclear and missile programs," some experts are skeptical that China, a traditional ally of Iran, will cooperate with the U.S. against Tehran.

Jon Alterman, CSIS's director of the Middle East, said he is doubtful China could use its influence over Iran to help ease tensions in the Middle East. "

I wouldn't expect China is able to play a useful role in de-escalating this conflict," Alterman said. "China might wish to be included in a larger grouping of countries as it was in the JCPOA process, but even so, I'd expect its role to be quite passive."

Others say China welcomes a distracted U.S., which would provide Beijing with breathing space to continue to build its comprehensive national power. "

The Chinese Communist Party would welcome developments in the Middle East that siphon U.S. resources and attention away from U.S. efforts to deter Chinese aggression," said Bradley Bowman, senior director of the Center on Military and Political Power at the Foundation for Defense of Democracies.