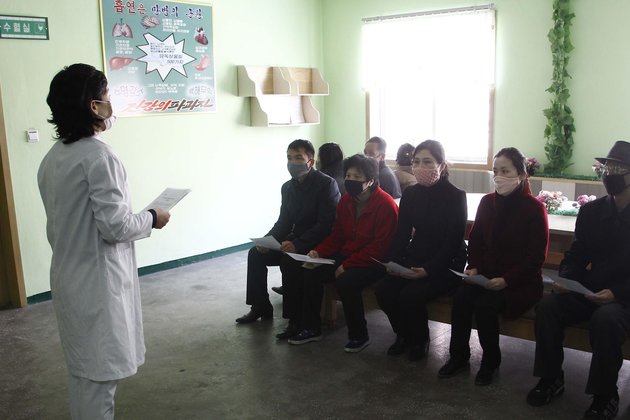 North Korea remains one of five countries that has yet to report a single confirmed COVID-19 case to the World Health Organization (WHO), the WHO said Tuesday, but experts told RFA's Korean Service that North Korea's preventative efforts are focused mainly on the capital Pyongyang, so it is likely that the deadly virus is spreading in the provinces.

In email messages to the Reuters News Agency, Edwin Salvador, the WHO's representative in North Korea said that the country's health ministry has been keeping the WHO updated on the situation weekly, and that it has the capacity to test for coronavirus in a Pyongyang laboratory.

Since the epidemic flared up in China in January, RFA's Korean Service has reported on Pyongyang's extensive measures to prevent the spread of the virus within its borders, including the quarantine of entire counties near the Chinese border, the cancellation of key cultural events, and the establishment of a quarantine center in a large Pyongyang hotel.

The government also isolated foreign residents and those who recently had been abroad to China, issued mandates that citizens don facemasks while in public, cancelled public meetings in favor of video conferences, closed off its borders with China while suspending legitimate and illegitimate trade, and hastily cremated patients who mysteriously died in what authorities claimed was the flu, RFA has previously reported.

But despite these measures and those reported by other outlets, Pyongyang never reported a single confirmed case of the virus.

Outside experts have publicly expressed their doubts, saying it is very likely that it crossed into North Korea from China in the early days of the epidemic, because the long border is quite porous. North Korea's healthcare system largely collapsed during a 1990s famine and remains rudimentary and resource-starved.

Others say that the preventative measures seem to be reactive, and focused on keeping hereditary leader Kim Jong Un and his inner circle safe from COVID-19.

Focus on Pyongyang only

In impoverished North Korea, only the rich and well connected are allowed to live in the capital, Pyongyang. When disaster strikes, the national response effort is usually directed at protecting the capital, leaving those in the provinces to fend for themselves.

Choi Jeong-hoon, a graduate of North Korea's Chongjin Medical College who is now a professor at Korea University in Seoul, told RFA's Korean Service that North Korea was handling the coronavirus crisis the same way.

"It's not that they can't afford to pay attention [to the provinces], they simply don't care," said Choi.

"They don't give [protective equipment they received from outside the country] to the provinces. Only Pyongyang has it, and since Pyongyang doesn't have enough, they can't afford to care for the [people] in the provincial areas," Choi added.

Jiro Ishimaru, head of the Japan-based media outlet specializing in North Korea, Asia Press, told RFA March 23 that according to the outlet's sources, coronavirus testing is not being conducted in areas close to the Sino-Korean border.

Officials say that seven civilians have been killed and six others wounded in a roadside bomb attack in northern Afghanistan.The ...

Tensions between U.S. black communities and police go back centuries

Outrage over racial profiling and the killing of African Americans by police officer ...

WASHINGTON, DC - Under siege in the White House, President Donald Trump is aggravating America's latest racial anguish in a ...

Chinese solid waste imports down by nearly 50% this year

BEIJING, June 2 (Xinhua) -- China is now moving closer and vows to achieve its goal of halting all imports ...

News Corp's closing of its community and regional papers, with few remaining and others online-only, cancels centuries of beliefs about ...

The two playoff finalists from the Spring Split of the China-based League of Legends Pro League (LPL) will be idle ...