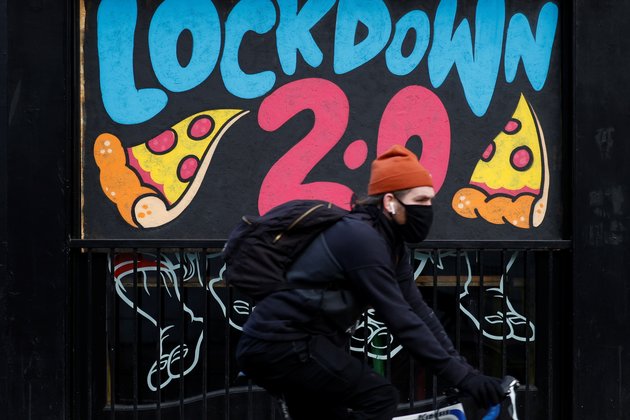 Britain's prime minister announced a fresh round of lockdowns Monday, closing schools and nonessential shops, as the country begins vaccinating health care workers and the elderly.

Prime Minister Boris Johnson said people must stay at home until at least mid-February, noting that British hospitals are under more strain now than they have been at any point during the pandemic.

"If the rollout of the vaccine program continues to be successful. If deaths start to fall as the vaccine takes effect. And critically, if everyone plays their part by following the rules, then I hope we can steadily move out of lockdown," Johnson said in a televised address Monday.

The announcement comes days after British health officials confirmed a variant of the coronavirus that doctors say is far more contagious than the original.

New York Governor Andrew Cuomo said Monday that a case of the same variant had been confirmed in an older New York state resident who had not traveled recently.

The B117 variant of the coronavirus had already been detected in California, Colorado and Florida, along with more than 30 other countries.

Also on Monday, Britain began administering the first doses of AstraZeneca's coronavirus vaccine. An 82-year-old dialysis patient at Oxford's Churchill Hospital was the first person to be inoculated.

British officials say half a million doses of the vaccine are ready for use.

The AstraZeneca vaccine is cheaper and more easily transported than the Pfizer-BioNTech vaccine because it does not need to be kept at extremely cold temperatures. The Pfizer shot has already been administered to many health care professionals in Britain and the United States.

France, which is administering the Pfizer-BioNTech vaccine, pledged Monday to increase the speed at which it is inoculating its health care workers after facing criticism from the public.

On Sunday, India approved for emergency use the same AstraZeneca vaccine that Britain is using.

India also approved an India-developed vaccine for emergency use, but some medical experts have raised concerns about the rushed approval of the domestically produced vaccine.

The All India Drug Action Network questioned India's lack of transparency about the vaccine and the lack of information about the drug's efficacy.

India said Monday it has recorded more than 16,500 new COVID-19 infections in the past 24 hours.

India is second only to the United States in the number of COVID-19 cases. India has 10.3 million cases, while the U.S. has 20.6 million, according to the Johns Hopkins Coronavirus Resource Center, which is tracking the global pandemic.

FILE - A man applies finishing touches to graffiti representing a vaccine, amidst the spread of coronavirus disease, in Kolkata, India, Jan. 2, 2021.

In Russia, Health Minister Mikhail Murashko said that more than 800,000 people had received the domestically produced Sputnik V vaccine and that 1.5 million doses had been distributed throughout the country of 147 million.

The Kremlin is pinning its hopes on mass vaccinations, not nationwide restrictions, to stop the spread of the virus and save its struggling economy from the hit of another lockdown.

The coronavirus has killed more than 1.8 million people globally since emerging in China in December 2019, according to Johns Hopkins.

Experts fear the worst is yet to come, predicting a sharp rise in cases and deaths after weeks of holiday gatherings.