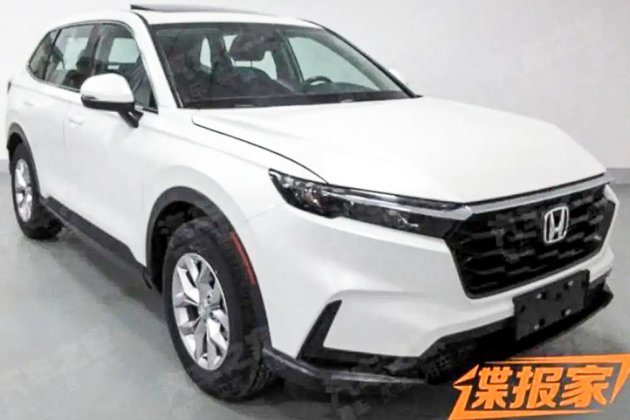 Honda is currently working on the development of the new generation CR-V. The SUV has already reached the end of its cycle and has been discontinued in many international markets including India. It was offered in both five and seven-seat layouts across the world.

When launched, it was one of the first premium SUVs to be offered exclusively in a five-seat configuration. CR-V along with Civic and Accord were discontinued from the Indian market after the Japanese auto giant shut down operations at its Noida-based manufacturing facility.

Images of what appear to be the new-gen Honda CR-V have leaked online, giving us a clear look at the front and rear of the permium SUV. New Gen adopts most of its design elements from Honda Breeze sold in China.

Exterior styling elements of CRV are in coherence with other modern Honda cars. For instance, the front fascia features a thick slab of chrome underlining the bonnet like new-gen Civic and City. Underneath the chrome slab, lies the horizontally slatted grille which resembles the one to be seen in the facelifted Amaze soon. The grille is flanked by sleek LED headlamps with unique internals and integrated LED DRLs.

The front end also features a muscular and chunky bumper giving it a rugged SUV vibe. The bumper houses strips of LED position lights on either side that seem inspired by the new-gen HR-V. Towards the rear, both CR-V and Breeze flaunt L-shaped LED taillights and twin exhaust pipes. However, the design of the rear bumper of CR-V is different from Breeze.

Highlights along the SUV's side profile include modern bits like the chrome beltline surrounding the windows, side door cladding and large overhangs. The flared wheel arches are filled with larger 18-inch (at least) alloy wheels. Other exterior styling highlights include a sunroof, a shark fin antenna and a blacked-out roof-mounted spoiler. Overall, the new-gen CR-V looks much bigger than the outgoing model, at least in pictures.

Powering the upcoming CR-V is a tried and tested 1.5-litre Turbocharged petrol engine that pumps out 190 bhp at 5600rpm and 243 Nm of peak torque at 2000-5000rpm. The SUV could also retain the mild-hybrid powertrain featuring a 2.0-litre naturally-aspirated petrol engine. This unit is good enough to produce 143 bhp at 6200 rpm and a peak torque of 175 Nm. Both powertrains are offered with a CVT automatic gearbox as standard.

For the uninitiated, China requires foreign car manufacturers to have a local partner in order to commence local assembly. In China, Honda has two local partners - GAC Honda and Dongfeng Honda. CR-V is a product by Dongfeng Honda while Breeze is manufactured by GAC Honda even though both SUVs share plenty of technical similarities.

It is too soon to predict if Honda will bring the new-gen CR-V to India considering the failure of the previous-gen model in the country. Honda is working on an SUV specifically for the Indian market but hasn't confirmed a launch timeline. We believe it could be a compact SUV to take on the likes of Creta, Seltos and the upcoming Maruti / Toyota SUV. For now, launch of new gen CRV in India is highly unlikely.

SHANGHAI, China: The central Shanghai district of Jingan, a key commercial area in China's financial hub, has announced that it ...