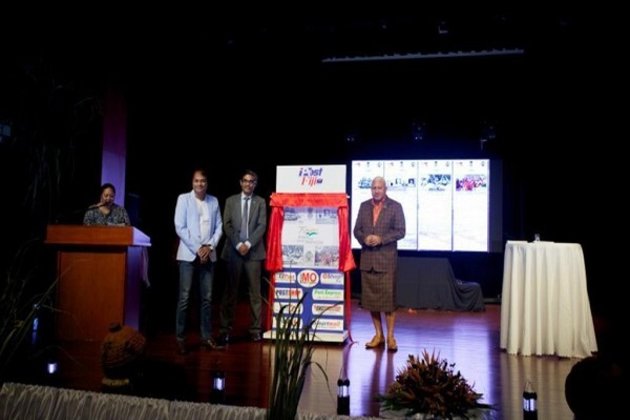 Suva [Fiji], May 14 (ANI): As part of the Azadi Ka Amrit Mahotsav (AKAM), celebrating 75 years of India's Independence, the Indian High Commission in Fiji, in association with Post Fiji Limited, brought out a set of commemorative postage stamps to mark the 143rd year of the arrival of indentured labourers from the country arriving in the Pacific island.

The commemorative stamps and a first-day cover to mark 'Girmit Day' were released by the Prime Minister of Fiji Josaia Voreqe Bainimarama with the High Commissioner of India to Fiji, PS Karthigeyan, at a grand function held at the Suva Civic Centre to mark the 143rd Girmit Day in Fiji.

Fiji's Minister for Education, Heritage and Arts Premila Kumar, Minister for Infrastructure and Meteorological Services, Lands and Mineral Resources, Jone Usamate were among the dignitaries present at the function apart from Assistant Ministers, senior Government officers, members of the Diplomatic Corps, Business Leaders, prominent members of the Indian Diaspora and a large number of the general public.

Speaking on the occasion, the Fijian Prime Minister recounted the enormous hardship faced by the indentured labourers who continued to struggle against racial discrimination even after the end of the colonial period in Fiji and underlined the need to make sure that the country does not revert back to such a state again.

He further talked about the importance of a better understanding of the history, heritage and contribution of the Girmitiyas and their descendants to Fiji among the wider sections of the society.

An exhibition of the commemorative stamps was also displayed at the event along with the archive material on Girmit History and Indian tourism. (ANI)