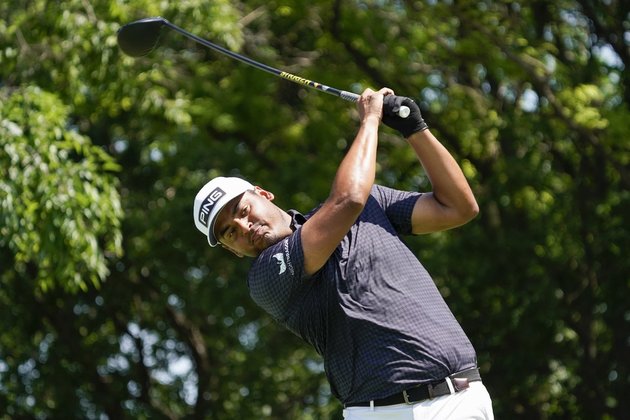 Colombian Sebastian Munoz fired a 6-under-par 66 on Saturday to take a one-shot lead at the ATT Byron Nelson in McKinney, Texas.

Jordan Spieth carded a 64 at TPC Craig Ranch to move into sole possession of second place at 20 under while Joaquin Niemann of Chile (65) is by himself in third at 19 under, two shots back. Niemann looks to become the sixth multiple winner this season.

James Hahn, who shot a Saturday-best 61, vaulted 34 places up the leaderboard to sit tied for fourth with Justin Thomas (64) three shots back at 18 under. Hahn finished one shot shy of his career low round.

Munoz wasted little time scoring, carding a birdie on the second hole en route to a five-birdie day. He also logged an eagle on the par-4 sixth hole. His clean card was ruined with a bogey on the 16th.

"Overall my mental game was really good. I got off to a good start and kind of kept pushing," Munoz said. "I didn't let, even though the playing partners weren't playing as good in the beginning, I kind of kept up the pace and put up the good numbers."

Spieth continued his trend of shooting a lower score in each round. Spieth (67-65-64) recorded nine birdies against just one bogey in pursuit of his second win in as many starts.

"This will be kind of the best chance I've maybe ever had going into Sunday," said Spieth, a Texas native. "So, it's really exciting, a lot of friends and family out, done a good job not putting too much pressure on myself, I just wanted to get into contention."

Hahn posted a clean round of nine birdies to go with an eagle on the par-5 12th hole.

"Everything went right," Hahn said. "I feel like it just played easy out there for me, but everyone's shooting, 9-, 10-under, someone is every day, so I just felt like why not me."

Second-round co-leaders Ryan Palmer and England's David Skinns both faltered in the third round. Palmer followed up Friday's electric 62 with a 70 to fall into a T6 at 17 under. Skinns shot 2-over 74 to fall 20 spots in T21 at 13 under.