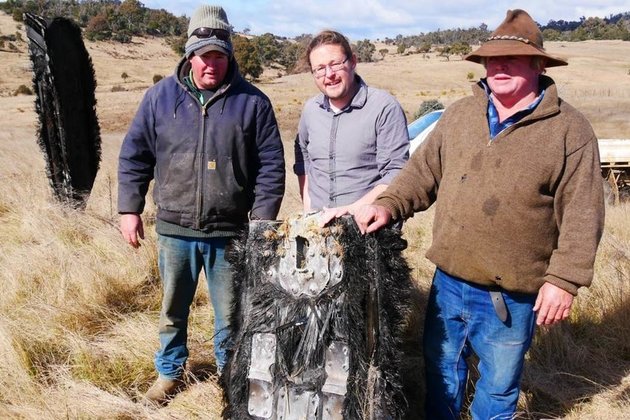 Large charred objects found by farmers in a remote area of New South Wales in Australia last week have been confirmed to be debris of Elon Musk's SpaceX capsule, the Australian Space Agency said on Thursday.

The organization stressed that it continues to engage on the discovery with its "counterparts in the US, as well as other parts of the Commonwealth and local authorities as appropriate."

SpaceX confirmed that the debris is likely to be a part of the Dragon spacecraft trunk which supplies the main capsule with electricity during its time in orbit before being discarded later, according to a NASA statement quoted by US media. The Dragon carried four astronauts - three from the US and one from Japan - home from the International Space Station in May, 2021.

SpaceX has not yet revealed if it plans to collect the debris.

Dr Brad Tucker, an astrophysicist at the Australian National University, was the first expert to inspect the debris. In a video he posted online one of the farmers who made an initial discovery says that his first thought upon seeing a strange object sticking out of the ground was that it was an "old burnt tree.

Tucker agreed that in most cases the suspected space debris turns out to be something else but in this particular case the evidence was strong.

He explained that a SpaceX Crew 1 trunk was "a cataloged object" and it was known to be going over New South Wales and re-entering Earth's atmosphere at around 7am on Saturday, July 9. At that time, he said, people "heard the sonic boom" and "saw the bright light and bits breaking off of the object fragmenting as intended."

He described the discovery in detail, saying that the debris is believed to be "a part of the fin of the trunk," and that the vertical piece is about three meters tall and weighs between 20 and 30 kilograms.

"Experts have checked out to make sure all of the material is safe and isn't a danger to anyone," Tucker added.

Usually the debris of space hardware gets buried on the ocean floor but in rare cases it ends up on land. In April last year, a pressure vessel from a SpaceX Falcon 9 rocket stage fell on a man's farm in Washington State.

In 2020, debris from a Chinese Long March 5B fell over Ivory Coast, leaving metal objects on the ground.

The space debris issue caused international tension last month when NASA administrator Bill Nelson criticized China for not sharing "specific trajectory information" about its booster rocket. China quickly hit back, reminding NASA of the incident in Washington State, pointing out that "American media used romantic words like 'shooting stars across to light up the night sky' and 'dazzling light show'" when describing the fall of that debris.