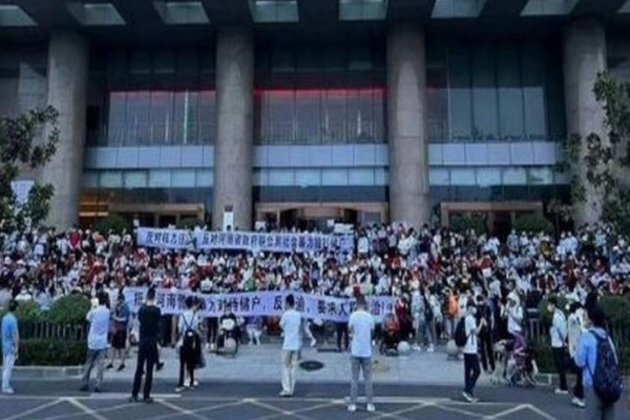 Beijing [China], August 5 (ANI): Owing to the authoritarian regime of Xi Jinping in China, the number of people's protests in the country is witnessing a perpetual rise but there is little to no coverage of such events in the mainstream media due to strong Chinese influence on media houses around the world, a report has claimed.

The major centres of protests in China are Beijing, Shanghai, Shandong, Henan and Anhui, it added.

Protesting against Jinping's strict Zero-Covid Policy, an enormous group of students and staff from the Beijing Institute of Technology assembled on campus in the Haidian district of Beijing, East Asia analyst Jenny Kin Jacobs stated, in a special report for Investigative Journalism Reportika.

The report also covered the Henan protests, in which several people were protesting for the last two months as their accounts were frozen by four rural banks in the central province of Henan.

According to the report, People protested on the streets of Beijing city against coronavirus vaccine mandates.

In Shanghai, the residents were pinned to the ground and arrested by dozens of PPE suit-wearing Police officers after objecting to their apartments becoming a quarantine centre which led to massive protests.

In another incident, a popular lecturer was thrashed by epidemic prevention personnel outside his residential installation in Xingfu Town in Pudong New Area during the lockdown as he left home to collect food delivery.

He was later diagnosed with a brain concussion, and severe head and eye injuries after the vicious attack. It left the people of Pudong in a state of shock and disbelief and led to an eruption of protests.

The westernmost district of Shanghai, Qiangpu saw no different scenario as protestors clashed with the police in Jinze township of Qingpu district to stop the police from arresting an old man for questioning supermarkets not providing affordable food during coronavirus lockdown, the report said.

Furthermore, the state-mandated lockdowns were enforced in Lingbi and Sixian districts in Anhui province in the first week of July. Lingbi is a tourism district, and Sixian is an industrial district. Therefore, the local populations involved in tourism or industrial sectors experienced disrupted livelihood, the report added.

Meanwhile, the daily-wage labourers, factory workers, and other industry unions held innumerable protests in Shandong against delayed payments and salary dues in the province. The police officers rebuked the protestors violently to suppress the protests each time in Shandong and it too met with insensitivity from the mainstream media.

Shanghai Dafeng Electronics, a subsidiary of Shanghai Quanta also encountered an employee protest in May as hundreds of young employees hopped over the gate and ran away. They gushed out of the blockade to clash with the guards. The severe protests took place as employees wanted to buy daily needs goods that were unavailable due to epidemic prevention and control, analyst Jenny Kin Jacobs stated in the report.

A growing discontent is seen among people in China against the government's "Zero-Covid" strategy and its suppression of people's demonstrations and protests against the policy in the most brazen and heartless manner.

Around mid-May this year, graduate students at Peking University staged a rare, but peaceful protest over the school's decision to erect a sheet-metal wall to keep them further sequestered on campus, while allowing the faculty to come and go freely.

The protests did not erupt in a single day and were already simmering over the regulations prohibiting them from ordering in food or having visitors and daily Covid-19 testing.

On the other hand, the Chinese Communist Party has often claimed that its Zero-Covid strategy has proven to be successful. But the truth was exposed with th help of various social media platforms where people have been posting the dark side of the communist regime of Jinping and how it has made the lives of people in China, miserable.

Communist Party of China is leaving no stone unturned and is moving quickly to quash people's movements and protests. Th party sees the protests as a potential challenge to its hold on power. (ANI)