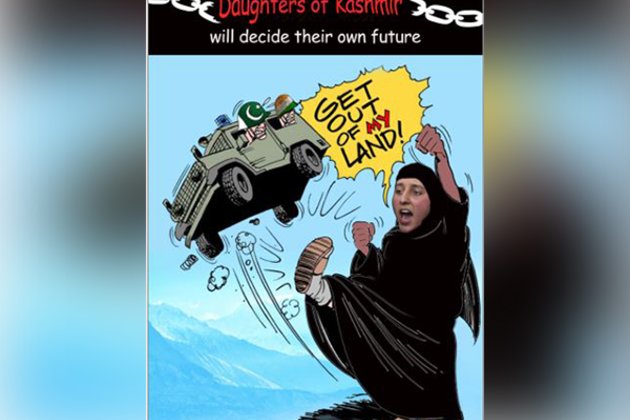 Muzaffarabad [PoK], August 6 (ANI): The stark contrast in the development of the two Kashmirs has created unrest in Pakistan-occupied Kashmir (PoK) as India is implementing several new projects in Jammu and Kashmir to meet the demands of its citizens.

The unrest in PoK is evident as the so-called Youm-e-Istehsal (Exploitation Day) being observed under the patronage of the Pak and PoK governments has not been able to garner much support from the people and Islamist parties, reported local media.

Moreover, the gravity of the situation in PoK can be gauged by a pamphlet which shows a PoK girl on the eve of so-called Youm-e-Istehsal kicking a Pak Army jeep and declaring "Daughters of Kashmir will decide their own future."Sentiments against Pakistan, the puppet PoK government and Pak Army and other security forces in the context of the proposed 15th amendment, tourism authority and occupation of PoK lands by Pakistan Army for establishing its installations, are fierce and alarming, reported local media.

PoK has suffered many budgetary cuts with the government favouring corrupt politicians as well as China making inroads into the territory and using the land to fulfil its ambitions.

The federal government in Pakistan has gone out of its way to appease China and is allowing its golden plan of forming a route through PoK. Thousands of Chinese engineers and workers are deployed in PoK, reports Asian Lite International.

The PoK also remains an underdeveloped territory due to Islamabad's treatment of it as a centre of terrorism, whereas New Delhi with its policy of development, peace and prosperity has made Jammu and Kashmir into one of the most developed regions in the world.

There is no comparison between PoK's capital city Muzzafarabad with Srinagar or Jammu, the twin capitals of J-K. It's like comparing metropolitan cities of Mumbai and Kolkata to a provincial towns in India, reported Asian Lite International.

J-K has four airports, and PoK has only 2. There are 35 universities in J-K and in PoK, there are only 6. While there are 2,812 hospitals in J-K providing free health care to people, only 23 hospitals exist in PoK, and many people die each month due to a lack of basic medical facilities and anti-venom vaccines, reported Asian Lite International.

The condition of roads in PoK is pathetic with people reported to plunge to their deaths on a daily basis into ravines in road accidents, due to a lack of safety infrastructure.

In February this year, Union Finance Minister Nirmala Sitharaman presented a Rs 1.12 lakh crore (USD 13.33 billion) budget for the Union Territory of Jammu and Kashmir for the year 2022-23. The Budget aims at building the economy and creating jobs in the Himalayan region.

The J-K budget focuses on education, home, and public health engineering, with power development getting the highest allocations for the financial year 2022-23.

J-K's economy is expected to grow by 7.5 per cent on current prices during 2021-22, reported Asian Lite International.

In J-K, four National Highway projects are expected to be completed in 2022. Ten new road/tunnel projects have been agreed upon by the Ministry of Road Transport and Highways of India under Bharatmala. The world's highest 1,315-meter long railway bridge over the river Chenab is targeted for completion by September 2022.

Projects under the Prime Minister's Development Package have seen an expenditure of Rs 36,112 crore.

A total of 25 projects have been completed/substantially and another four projects are likely to be completed by the end of the current financial year.

The federal government in Pakistan was supposed to provide Rs 49.9 billion to PoK as its 3.64 per cent share in the federal taxes pool (variable grant) but that too has been slashed by Rs 4.4 billion.

The PoK ministers are of the opinion that the federal government's decision to slash the budget allocations could affect PoK's financial system beyond control and make the region poorer. (ANI)