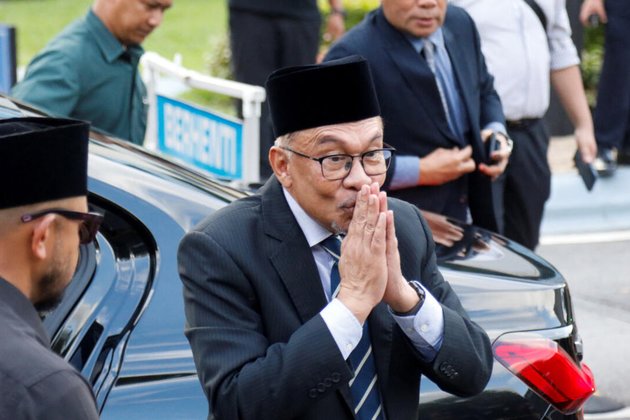 "After taking into consideration the views of Their Royal Highnesses the Malay Rulers, His Majesty has given consent to appoint Anwar Ibrahim as the 10th Prime Minister of Malaysia," the statement said.

A general election on Saturday ended in an unprecedented hung parliament with neither of two main alliances, one led by Anwar and the other ex-premier Muhyiddin Yassin, immediately able to secure enough seats in parliament to form a government.

Anwar's appointment caps a three-decade long journey from heir apparent to a prisoner convicted of sodomy, to longtime opposition leader.

The decision on the prime minister came down to King Al-Sultan Abdullah Sultan Ahmad Shah, after both Anwar and Muhyiddin missed his Tuesday afternoon deadline to put together an alliance.

The constitutional monarch plays a largely ceremonial role but can appoint a premier he believes will command a majority in parliament.

Anwar finally emerged victorious after other smaller blocs agreed to support him for a unity government. His rise to the top will ease anxieties in the multiracial nation over greater Islamisation under Muhyiddin and spark hopes that reforms for better governance will resume.

Prime ministership after years in jail

In the course of a long political career, the 75-year-old Anwar has time and again been denied the premiership despite getting within striking distance over the years: he was deputy prime minister in the 1990s and the official prime minister-in-waiting in 2018.

In between, he spent nearly a decade in jail for sodomy and corruption in what he says were politically motivated charges aimed at ending his career.

The uncertainty over the election threatened to prolong political instability in the Southeast Asian country, which has had three prime ministers in as many years, and risks delaying policy decisions needed to foster economic recovery.

Malay Muslims are two-thirds of Malaysia's 33 million people, who include large ethnic Chinese and Indian minorities. Many rural Malays fear they may lose their privileges with greater pluralism under Anwar

PALMDALE, California: Northrop Grumman has unveiled its new B-21 "Raider" jet, the first in a new fleet of long-range stealth ...

Chinese hackers stole millions worth of Covid relief money in US: report