US government is a partner to the people of Afghanistan: Ned Price 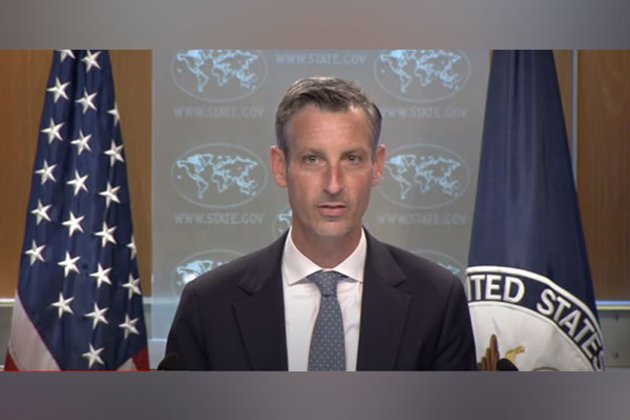 Washington [US], January 26 (ANI): The United States government is a partner to the people of Afghanistan and supports them in a number of ways, said US State Department spokesperson Ned Price during a regular press briefing on Wednesday.

During the briefing, Price further said that the US in its humanitarian efforts has helped the people of Afghanistan through its leadership and has also provided an assistance of more than 1.1 billion dollars that bypasses the Taliban.

"We have made very clear decisions that the US govt is a partner to the people of Afghanistan. We are supporting the people of Afghanistan. We are doing that in a number of ways. We are doing that through our leadership when it comes to humanitarian assistance providing more than 1.1 billion dollars to the Afghan people in a way that bypasses the Taliban...that is directly to the Afghan people," he said.

The State Department spokesperson also said that the US has consistently voiced for Afghan people, and their rights as well as the women of Afghanistan.

Earlier on Monday, the US said that it is reviewing its approach and engagement with the Taliban in the context of many human rights violations that are taking place in Afghanistan under the atrocious regime and it is actively evaluating with the allies and partners to take the next appropriate steps towards it.

US State Department Spokesperson Ned Price, in a press briefing, underlined that the US continues to be the world's leading humanitarian provider to the people of Afghanistan, and is not providing the Taliban with any support.

When asked about former US Secretary of State Mike Pompeo's book, Price responded by saying, "He is expressing the view as a private citizen as his right."In his new memoir titled "Never Give an Inch, Fighting for the America I Love" Pompeo detailed a conversation with the North Korean leader during his first trip to Pyongyang on March 30, 2018, ahead of the US-North Korea summit held three months later.

"I do not think the world properly knows just how close the India-Pakistan rivalry came to spilling over into a nuclear conflagration in February 2019," Pompeo wrote in his memoir, "Never Give an Inch: Fighting for the America I Love."Responding to a media query on the Russia-Ukraine war and the supply of Abrams tanks to Kyiv, Ned Price stated that every single element of security system that the US has provided is for Ukraine's self-defence.

US President Joe Biden announced on Wednesday that he would provide 31 M1 Abrams tanks to Ukraine, reversing the administration's longstanding opposition to Kyiv's requests for the highly sophisticated but maintenance-intensive vehicles, according to CNN.

As Biden has given his approval for the vehicles to be sent, the 31 Abrams will constitute an entire Ukrainian tank battalion. (ANI)